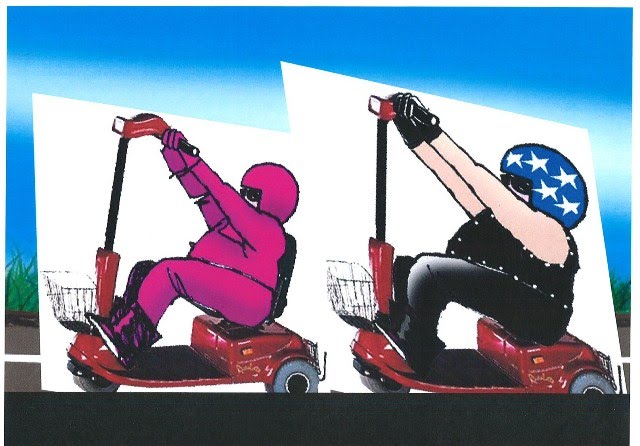 After parking for the night, we'll still have time for a little racing

Oh, The Challenges We Have Met!

One of the big challenges we have encountered is trying to figure out what day it is.  Also what time.  Also where we are.  So it doesn’t help when the authorities put cities where they don’t belong and then call states by names that don’t appear on any maps.  You can imagine our confusion when we arrived in Kansas City, only to find out that it wasn’t in Kansas but it was in Missouri.  Even worse, Google doesn’t recognize Kansas City as being anywhere near Kansas or Missouri but tells you that you’re in Independence.  And if you ask anyone, they’ll tell you that you’re not in Missouri, you’re in Missourah, which doesn’t appear anywhere.  When you ask why they pronounce it Missourah, they look at you funny and say “We don’t say Missourah…. We say Missouraaah, because that’s how it’s spelled”.  By that definition, Mississippi should be Mississipaaah, I guess. 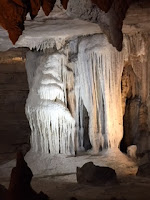 After spending a couple of days in Kansas City and/or Independence and possibly in Missouri somewhere, we headed for Springfield, which is also in Missouri and doesn’t seem to come with any other names.  There is so much to do in that area!  But first we finally met one of our big challenges:  after only 18 months and 10 States, we found bottles of Smuckers Sugar Free Syrup in a little tiny grocery store near the RV resort.  This was a momentous occasion!  In fact, we went back there twice to stock up. 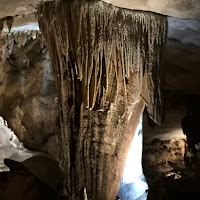 Then we spent a great afternoon taking a trolley tour through the Fantastic Caverns.  If you like rocks this is the place to see them.  And they weren’t just local rocks!  Nope….they even had rocks from Sudbury!   Or maybe it’s pronounced “Sudburaaah”. 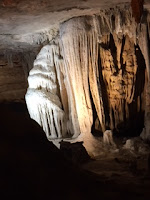 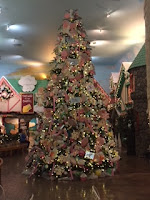 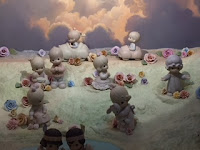 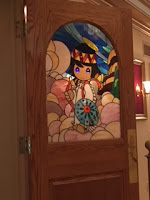 An hour away, we spent a great day at the Precious Moments Museum and Chapel which is absolute proof that some people have way too much time on their hands.  The Precious Moments figurines are adorable and there is literally one for every occasion.  I think it is a bit over the top though, to see them featured in a reproduction of the Sistine Chapel.  Still, if you can’t get to Rome, this is the next best thing.  Being early October, it was also time to start thinking about Christmas (?) so they put up a gorgeous tree.  The most amazing part of the day, though, was that all three of us walked out of there without buying anything!  Another challenge met and conquered!

I named my new Beast, Jeff – after the big, grey insatiable beast in Men in Black.  Turns out Jeff is also insatiable…. for money.

First of all, let me explain about the toilet system in the RV.  It’s STUPID.  When you flush, it makes a very loud, grinding sound for 90 seconds both inside and outside the RV.  Do you know how long 90 seconds can be when you’re trying to be discreet? The thing all but screams “Hey everyone, I’m going to the bathroom!”

To really make sure that the system is as stupid and inefficient as possible, the geniuses who designed it put the pump right under the bed – so that you can’t flush at night without waking everyone up within 500 yards.   And then they put the only access directly under the bed with a little, tiny panel that might, if he hasn’t eaten a big lunch, fit a five-year old.  It turns out that there aren’t that many skinny, five-year old mechanics out there.  I have written to Fleetwood to tell them that they win the Award for Stupidity in Design.

So there I was, on day 2 with Jeff and the little light in the bathroom showed red all the time.  The brochure said it should have been green.  Since I had never seen or heard of a toilet system like this, I wasn’t all that concerned until it stopped flushing.

Now here’s an interesting thing:  no matter what time of year it is, or how many RV repair places you can find, no one will look at your rv for 3 months.  That seemed a little long to go without flushing.  Not to mention it was going to snow at some point.  Fortunately, the Cummins repair shop in Kansas City agreed to have a look – a fact I’m sure they regretted.

Then in St. Louis, my big slide-out wouldn’t slide in.  A mobile RV repair person told me I had sheared off a tiny little bolt which, apparently, holds up the entire weight of one side of the RV.  He replaced it, the slide came in and I was on my way to Kansas City with both toilet and slide repair now on the list.

They found a skinny mechanic who opened the panel and discovered – no doubt to his horror – that the entire pump assembly had exploded and the whole compartment was flooded with stuff…. and not nice stuff.  Lots of really smelly, ugly stuff that I will leave to your imagination. 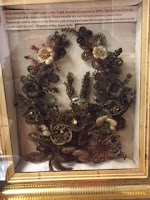 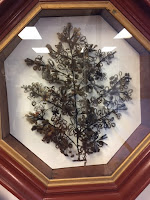 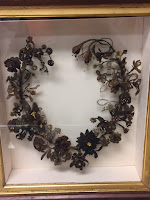 Meanwhile, Woodchuck, Deadeye and I checked out a Hair Museum in Kansas City.  Back in Victorian times, the thing to do was make wreaths, jewelry and pictures out of the hair from dead people in your family. I have visions of all these corpses being laid to rest after they’d been shaved bald.  To be fair, some of the hair was taken from live persons too.  It was really quite an interesting thing to see and I came to the conclusion that Victorians had way too much time on their hands.

We could have taken a course in how to do hair weaving but it was $2500 for 3 days and, besides, all of our brothers are bald so the wreaths wouldn’t have been complete.  Plus I have no artistic talent. 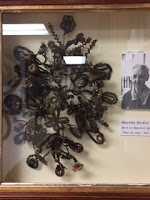 Then we were off to Springfield and then Branson, Missouri.  I got Jeff back and was happy to learn that I could flush my toilet as often as I wanted, except at night.  My slide, on the other hand, was still causing problems.

Where Did The Year Go!?

I just checked my blog and realized I hadn’t written in a year!  My deepest apologies to the person(s) who watched and waited in vain.  I know it’s been hard!  On the plus side, you’re now going to have a year’s worth of reading to do.  How much fun is that!?  Maybe you should buy a case of beer first.


Well, after last year’s summer of mud, I left for BC on September 12th which, amazingly, is the day that the gods suddenly remembered that Ontario hadn’t had a summer yet.  I don’t think it’s any big coincidence that I am, without a doubt, the cause of bad weather.  When I show up, the temps drop by 10 degrees and it starts to rain or worse.  I’ve seriously thought of renting myself out to those people who have major forest fires.  I could just show up and the weather gods would take care of the problem. Last year was a bit excessive, though, even for the rain gods. 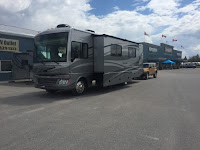 All this time, I was waiting to take possession on the new RV I bought in June 2017 to replace the poor old Beast, which ended its travels by taking out a tree at the Pinery.  Here’s a word of advice:  NEVER buy a vehicle outside your home province!  It’s a nightmare.  Before they would register it, ICBC had to see the RV.  They wouldn’t accept my photos or even the dealer’s description and photos – nope they had to see it live and in person.  So, I arranged for the unit to be driven from Ontario to Cranbrook, BC, which was the closest town to the Alberta border.  After only 5 days of travel, 2000 miles, several hundred dollars worth of gas, and $600 dollars for my own flight to Cranbrook (oh yeah…they had to see me too), it arrived in the parking lot of the insurance company.  The ICBC rep went out to see it and confirmed that yes, by god, it was an RV.  It took all of 3 minutes and that included the walk across the parking lot. 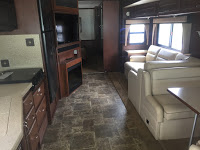 But there was more.  It turns out the dealer hadn’t sent the correct paperwork.  After only 8 hours of trying to figure out how to insure the RV, we had to give up and wait for the correct paperwork to be sent.  I flew back to Vancouver to await delivery and, 4 days later, flew back to Cranbook for round 2.  The ICBC rep had to go back out to the RV to confirm that yes, by god, it was still an RV but now it had to be weighed!  Why, is anyboby’s guess since the weight of it was clearly written on the door panel.  But the guys found a place that would weigh it and got that out of the way but only because the insurance agent knew the guy weighing it and agreed with his assessment that it was, by god, an RV.  After only 4 hours, the RV was registered and insured and the guys were ready to leave except for one little problem:  the weather gods figured out where I was and closed the one and only highway out of town by dumping several inches of snow all over it.  But eventually the highway was reopened and the guys brought my RV back to Ontario, all safe and sound. 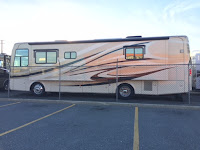 Meanwhile, back in BC, my brother, Rusty Lugnuts and his wife, Lulu Lugnuts, and I decided to spend an afternoon idly looking at RVs.  Turns out it wasn’t so idle.  They bought a gorgeous 38 foot Holiday Rambler they nicknamed “Billy” (as in Billy Holiday).  It seems that there’s going to be a Prieur convoy starting in 2018!